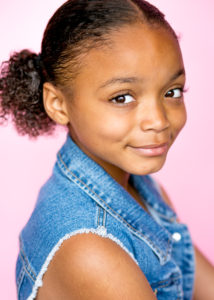 Congratulations to Kayden Swan for her recent booking of ABC’s new pilot, Nana. Swan will play the role of Briana in the multi-cam comedy.

Ben Lawson will star opposite Katey Sagal in the multi-camera hybrid, which centers on an obsessive, overprotective dad (Lawson), who is forced to invite his brash and bawdy mother-in-law — Nana (Sagal) — into his home to help raise the two granddaughters she barely knows.